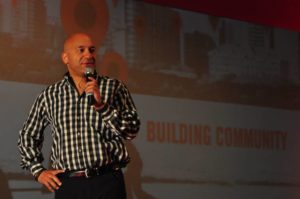 Achieving the Impossible – A Sport Memory

I have a lot of sports memories, both as a player and as a coach, but if I had to pick one that stands out it would be the one I’m reminded of every day when I look at the football I keep on my desk. So I’m going to let that football tell the story. Here is what it would say . . .

My skin shows all the signs of the wear and tear that you would expect after a high school football season. It shows the signs of the kicks, the completed passes and the fumbles, the wins and the losses. But the marks I am most proud of are the ones you can just barely make out—Simon’s fingerprints. Marks I would never have gotten if he hadn’t achieved a nearly total transformation.

It all started in Grade 9, when Simon was on the junior-varsity football team. He was a short, pudgy, baby-faced, 255-pound kid with average skills. The coach saw Simon’s potential and pushed him hard in practice and was tough on him in games. I guess everyone but Simon seemed to see how good he could be. But Simon was insecure about his weight, embarrassed every time he came in last in a sprint or was winded in a drill. He definitely had potential, but his excess weight held him back. It was literally the elephant in the room—no one said anything about it and Simon never tried to trim down.

Then one day toward the end of the year his coach asked Simon whether he was going to try out for the varsity team. Simon said he was planning to, but he didn’t want to be a linebacker anymore; he told his coach he wanted to be the quarterback. That’s when the words were finally spoken: “You’ll need to get your weight down to 195 if you want to be a quarterback,” his coach said.

And BAM!—something in Simon changed in that moment. He was triggered, ignited, or whatever you want to call it. His drive was off the charts to the point of obsession. His coach created a workout regimen for him, he changed his eating habits, and he worked with laser-like focus for months on end. The weight poured off.

Simon made the varsity team in Grade 10, but not as quarterback. But that didn’t stop him. He kept up his routine and seemed to get stronger and quicker with every pound that came off. Then in Grade 11, when the starting quarterback went down with an injury in the preseason, Simon was given his chance to step in.

It was clear from the first play that all his hard work had paid off. His strength and speed seemed to pair with his heart and his determination to succeed as quarterback. By the end of the game it was apparent to the coaches, to his teammates, and to the spectators that Simon belonged in that role. He became the starting quarterback, a team leader in that season. The other players learned from him and looked up to him. He led his team to the Toronto Tier-2 City Championships that year. Simon is now on his new path and playing pro in Germany.

I won’t have a chance to get any more marks on my skin. My days as a football in play on the gridiron are over. But I still serve a purpose. I’m the ball from Simon’s last high school victory, and Simon’s mom gave me to his coach as a thank-you. A thank-you for showing Simon what he could do and helping him believe he could do it.

Buy and read Life is a Sport for more stories to help you support your athlete’s journey.